After several months of speculation, the Federal Reserve finally withdrew the punch bowl. This ended speculation on “when” and followed their action to reduce a dovish stance. They started scaling back their bond purchases a few months ago, so the inevitable Fed Fund was only a matter of time.

Most economists thought the Fed should have taken this step months ago. As we’ve discussed here over the past few months, is booming. Raising interest rates is one of the fastest and most powerful methods used to slow the economy and eventually reduce inflation.

Inflation has been exacerbated by Russia’s recent incursion into Ukraine. As we highlighted earlier, the battle in Ukraine has slowed or even stopped the export of many agricultural products, including fertilizers, wheat and other cooking oils and food sources needed by many European countries, like Hungary and Italy, fearing not to have enough. food for their own citizens.

With prices rising out of control in almost every category, many expected much more aggressive action from the Fed. Estimates ranged from a quarter point to a full point. With the first interest rate hike in over 4 years, the Fed voted to raise the Fed Funds rate by a quarter point.

They also have up to 6 more increases in 2022. Fed Chairman Powell also reiterated that if they finally hit their target rate of 1.75% or higher in Fed Funds, the economy would be strong enough and resilient to withstand the brakes put in place with little or no risk of recession.

The reaction of the stock market. Is it time to buy?

The relief that the Fed has started a tightening cycle, but not too quickly, and the prognosis that the economy could withstand these hikes, gave investors cause for celebration. Traders covered their shorts and put cash to work.

The news helped propel stocks to one of the best weeks since November 2020. New buying power took stocks out of correction territory and rose more than 5% for the week on the () as well as (). The () did even better and rebounded more than 8% over the week. See the graphs below: 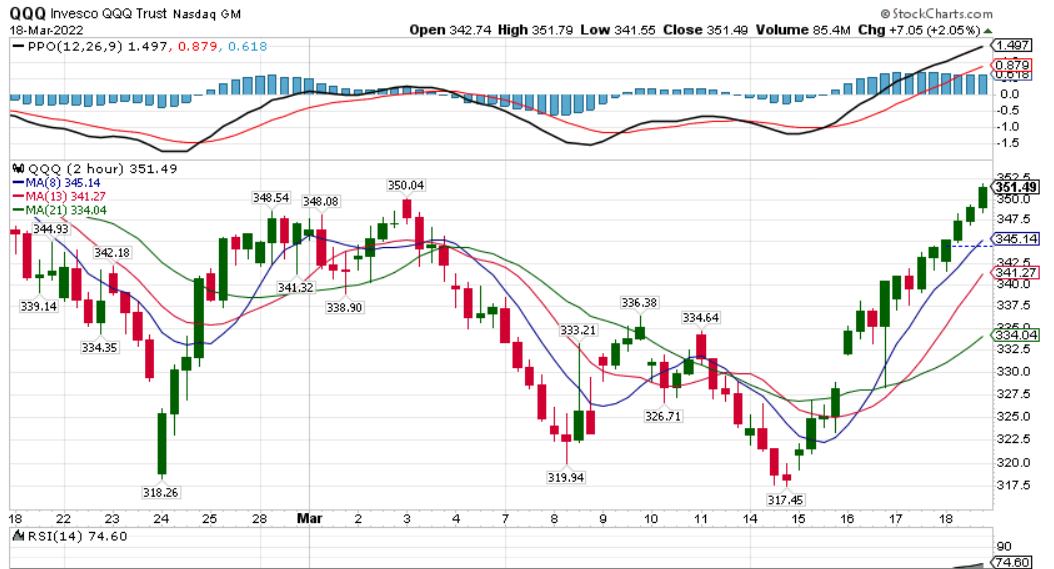 There is historical precedent that when you have at least 3 days of S&P 500 up over 1%, it predicts a good market in the future. Please consult the following table to better understand this historical phenomenon. 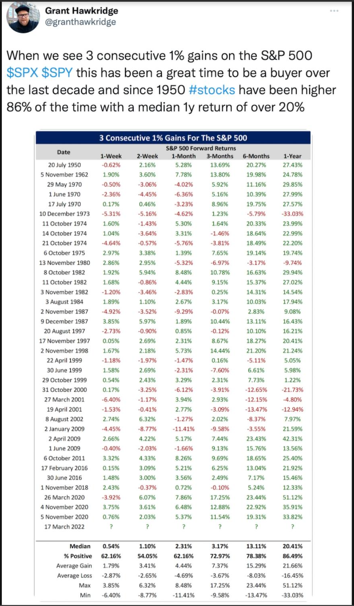 Will this be the right remedy against rising inflation? Will these movements begin to slow the economy with the right dose? Will rising and high (and harmful) prices start to fall? Will the average consumer be able to navigate this boiling economy? When will gasoline prices stabilize or even start to fall?

These are important questions that the Federal Reserve will need to weigh carefully when determining whether larger increases in federal funds will suffice. We at MarketGauge were surprised that the Fed only chose to make a 25 basis point (quarter point) hike. Like many others, we thought a larger initial increase was warranted. However, we are reminded that when you go from zero in Fed Funds rates (with accommodation in bond buying) to a quarter point, that is seen as a big jump. But is it big enough?

The Federal Reserve is now walking a very tight tightrope. Although their biggest interest is to stop the rate of inflation, they don’t want to send the economy too quickly into a downturn that could cause a recession. The Federal Reserve is responsible for controlling inflation. This rate is still targeted at 2.0% per year. If they only bring it down to 4.0% or 4.5%, which is expected later this year, will they have to apply the brakes more? Will this send us into a recession?

The period we are entering now can be quite tricky to manage money. Rising interest rates can have a profound effect on slowing the growth rate of certain industries. Higher borrowing costs coupled with lower growth rates generally have a moderating effect on the multiples investors are willing to pay for growth-oriented companies.

Here are some suggestions to help you navigate this environment: