Immigrants and refugees create great expectations in the country they arrive. In Chile, however, today as decades ago, such aspirations for a better and fairer life can be tarnished by a harsh reality.

Hostility towards immigrants to the point of endangering their lives was a common thread that spun a commemoration held on August 30 on the narrow cobbled alley outside London 38 Memory space, organized in collaboration with Justicia y Dignidad Sin Fronteras, and a number of other organizations in Santiago. The event was the official launch of “30 to 30”, a series of month-long activities against racism in Chile.

It was the International Day of Missing Detainees, proclaimed in 2010 by the United Nations. Of the 1,193 people (i) subjected to this endless absence which was the state policy of the Chilean dictatorship, 88 people were seen at the 38 London Street Detention and Torture Center run by the repressive secret police of DINA in 1973 and 1974. (ii) This year’s commemoration focused on the foreigners and immigrants who are part of this tragic list.

A greater awareness of the vulnerability of immigrants in Chile, which has over the past ten years become one of the main destinations for Latin American regional immigration, has been reinforced by a coincidence of the date. On August 30, 2017, Haitian immigrant Joane Florvil was detained in Santiago, culminating with her death a month later.

When it comes to foreign residents of Chile, the two tragedies are interwoven by an attitude that stems from a similar root.

In the 1960s, under the presidency of Eduardo Frei Montalva and during the three years of the Popular Unity government of Salvador Allende, Chile was seen from afar as a stable democracy with the promise of an increasing improvement in the quality of life. Thousands of foreigners saw Chile as a place to study, work, live and, during Allende’s tenure, observe the socialist process. In addition, neighboring countries overwhelmed by authoritarian regimes have led to an exodus of hundreds of people who have sought refuge in Chile. At the time of the military coup, according to the estimates of the military junta itself, around 13,000 foreigners were living in Chile. (Iii)

On September 12, 1973, in the aftermath of the coup, radio and other media broadcast a military decree ordering foreigners to report to local police stations. During the following days, Chileans heard soldiers calling them to denounce all foreigners: “Do not have compassion for the foreign extremists who came to kill Chileans. (Iv) Overnight, aliens had become potential enemies. Sixty-one immigrants are among those forcibly disappeared in the dictatorship’s custody, while dozens have been arrested and deported. In addition, 200,000 Chilean citizens were forced to leave this country, which was not a suitable land for immigrants at the time.

With the inauguration in March 1990 of the first post-dictatorship government, Chile projected itself as a prosperous developing country with modern communications and infrastructure. However, the political and economic structure inherited from the dictatorship has remained largely intact. Truth and justice were also on hold for the human rights violations committed during the dictatorship. The absence of full justice is another common thread that unites the judicial processes for crimes committed by the dictatorship with those committed today, as in the case of Joane Florvil.

The recognition of Chile as a member of the circle of democratic countries was crowned in 2004 by the invitation to participate in the United Nations peacekeeping mission in Haiti. The thirteen-year presence of Chilean troops on the island generated a positive image of Chile, encouraging thousands to travel to the far south of the hemisphere.

At the beginning of 2017, when Joane Florvil arrived in Chile, expressions of the government itself which stigmatized immigrants, differentiating between “good and bad immigrants”, were already being heard. It was a strategy by which the government justified measures that denied visas specifically to Venezuelan and Haitian immigrants. The consequence of this policy for many immigrants has been an extreme vulnerability and precariousness in the quality of their daily life. Then, in 2021, the government proceeded with the implementation of an action, unprecedented since the years of dictatorship in Chile: the administrative and massive expulsion of immigrants, mostly Venezuelans. Institutional mistrust and repressive policies affecting immigrants represent another link that connects today’s government to the military regime.

A discriminatory view of immigrants and Afro-descendants in particular had enormous consequences for Joane Florvil. A series of errors, negligence and false assumptions on the part of municipal, police and health authorities led to his arrest and the dispossession of his two-month-old daughter. As happened 45 years ago when the communications media reduced the detention of foreign residents, Joane is now criminalized by repeatedly transmitting images of the handcuffed young mother who allegedly abandoned her baby. A month later, on September 30, 2017, Joane Florvil died in hospital. Her daughter remained in the care of the government child protection agency until her now widowed husband could pick up the child.

Subsequently, other situations of discriminatory negligence resulted in the death of Monise Joseph, 31 years old (May 2019) while awaiting treatment in a hospital and of Emmaus Louis, 6 years old (January 2021) who drowned in a swimming pool during a school trip. On August 31, Louis Gentil became the last Haitian immigrant to die, this time shot dead by police, according to witnesses without cause, in the district of La Ligua in Santiago. 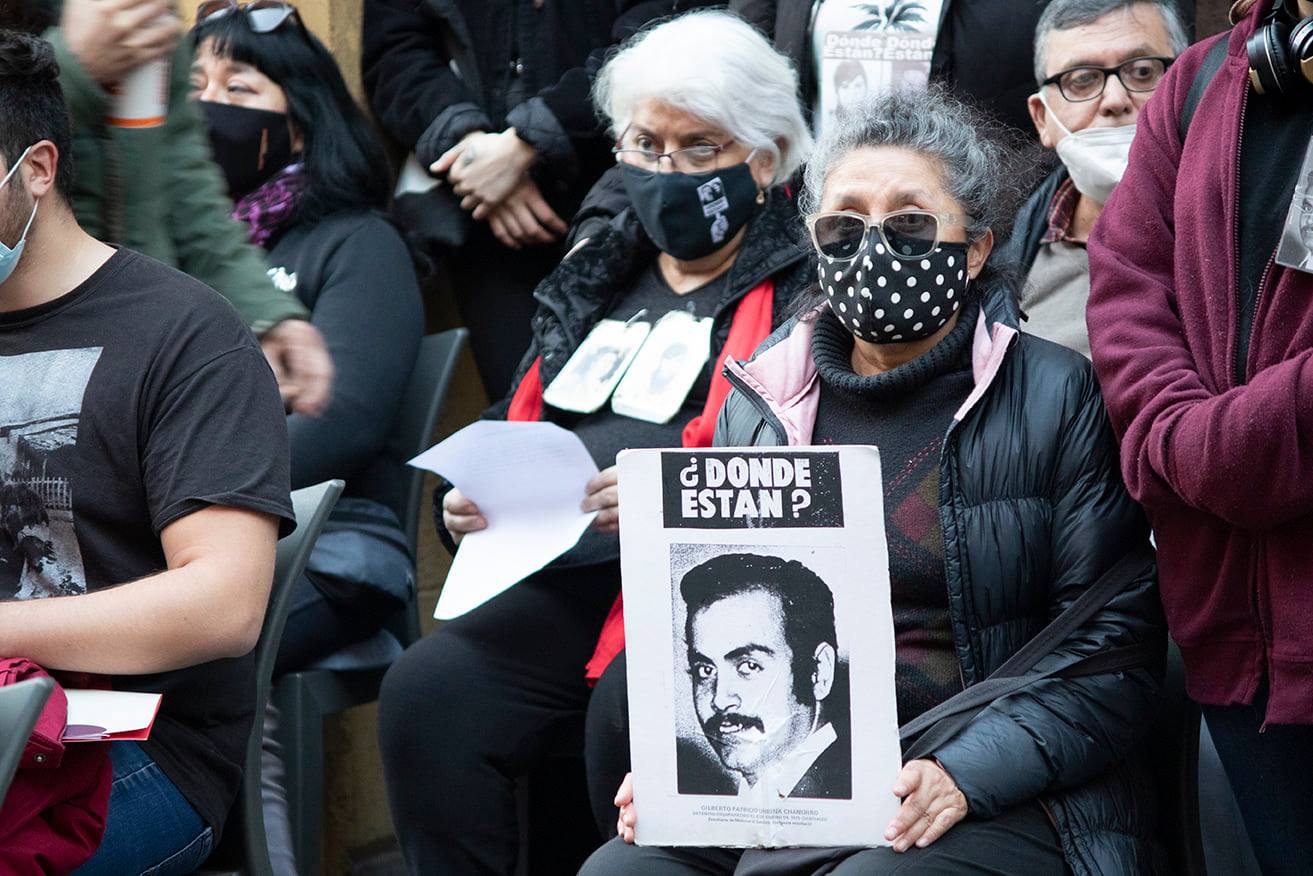 Since the start of the democratic recovery process in 1990, five people have not been found after their arrest by the police: Hugo Arispe (2001), José Huenante (2005), Ramón Pacheco (2008), José Vergara (2015), and the young immigrant Haitian Jean Fedor Louis (2020). The lack of truth and justice in these cases is another link in the chain that links them to the majority of detainees who were forcibly disappeared during the dictatorship.

The seventy people, masked, gathered in front of the London 38 memorial site listened to the accounts of 19 immigrants who were forcibly disappeared under the dictatorship. They also heard Haitian social work student Michel Joseph say: “In Chile, we are worse than animals. The animals here receive medical care and live well, but we are humiliated and mistreated. The color of our skin has made us victims of this supposedly democratic system.

Carlos Astudillo took the microphone, still leaning on crutches almost two years after police seriously injured him at the start of social protests in October 2019. He told the crowd: “Human rights violations link many generations. They connect those of us who have suffered human rights violations today because there is no justice for us. “

The London 38 and the coalition Justicia y Dignidad sin Fronteras London 38 have collaborated on immigrant rights issues for several years. For the series of events programmed in the “30 to 30” program, they are joined by other organizations: Trama Tejido Migrant, Ethics Commission Against Torture, Ampro, Migraciones y Access to Derecho, Collective of feminist professors and students, Ciudadano Observatory, Jewish Association Diana Aron, and T-Zen. The activities will end on September 30 with a memorial service in front of the hospital where Joane Florvil died four years ago.

Thanks to London 38 for the photo of the event.